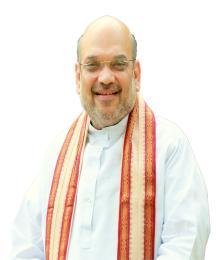 Amit Shah was born to Smt. Kusumben and Shri Anilchandra Shah, in an affluent Gujarati family on 22nd October 1964. Amit Shah represents the emerging New India in every sense of the term. Leading the Party from the front for the last five years, he has been remarkably successful in expanding BJP’s organisational foot print, securing one electoral victory after the other in State assembly elections. During his tenure, Party has become the world’s largest political party with over 10 crore registered members.

Amit Shah has risen to Head the ruling Party of India literally from the grass roots. Initially, he joined the Rashtriya Swayamsevak Sangh and later became an active member of the Akhil Bharatiya Vidyarthi Parishad (ABVP), to become its Ahmedabad city unit secretary. Later, he also shouldered the responsibilities of Secretary as well as Vice President of BJP,Gujarat State. In 1997, he became National Treasurer of the Bharatiya Janata Yuva Morcha (BJYM).His dedication, dexterity and above all result oriented performance made him In-Charge of several election campaigns of the National Leaders including that of L K Advani in 1991, Atal Bihari Vajpayee in 1996, both in Gandhi Nagar Parliamentary constituency. No wonder, when Shri Narendra Modi had decided to contest his first Assembly Election in 2001 from Rajkot-2 assembly constituency, Amit Shah was again theCampaign Chief

Beyond campaigns, Amit Shah also became known for his adroit handling of organisational matters. In 2013, he was appointed as National General Secretary of the BJP and In-Charge of Uttar Pradesh. His painstakingly carried out efforts earned BJP a historic success in the Parliamentary elections of 2014. He took over as BJP National President in July 2014 and from there onwards there is literally no looking back. During the last five years, under the twin leadership of PM Narendra Modi and Party President Amit Shah,BJP has successfully formed Govts in Haryana,Gujarat, Arunachal Pradesh, Uttar Pradesh, Uttarakhand, Tripura and Himachal Pradesh. Also, together with alliance partners, BJP has returned to power in States like Jharkhand, Maharashtra, Assam, Goa, and Manipur. Till recently in Jammu and Kashmir and currently in Bihar, Nagaland and Meghalaya, BJP is the junior partner of the ruling coalition

As a legislator, served as

In the co-operative sector

In the fields of sports ---